Wind blustering my hair about in the summer warmth, leaving a Culver’s, I finally understood what it was about the Midwestern landscape that most caught my attention: The sky.

Instead of a valley near Appalachia, I walk about the prairies and discover it’s the endless horizon that grabs my gaze and leaves me feeling unconfined and freer (not that mountains aren’t beautiful). I feel a strange freedom and desire to run. It’s just so strange to not be surrounded by mountains or at least see them looming at the distance.

The sky has always attracted me, really. I’ve always wanted the power of flight and much of my childhood travel memories happened by plane. Sunsets make my heart swell and sing praise, so I end up whispering under by breath that the heavens really do proclaim His glory (cheesy as that sounds). Lately, on my harder days, the Lord causes it to rain almost every time; the greener vegetation around reminds me of His provision and not only does it bless flowers, but God knows I love rain.

Right before driving into Wisconsin, I looked out my passenger window and saw a stark grey eating up the bright, sunny sky. The contrast of sun and dim rain clouds made me feel a looming overhead. We were entering into a storm.

Stepping out after Culver’s and looking at the glowing sign in the darkness made me more aware of the sky’s transition from that grey to deep, blue evening.

The heavy clouds and great darkness also made me aware of the many questions I was asking God. I felt stormy within, swelling and swirling in my head with all the “I can’t do this…” statements and “How are You going to…?” questions I could drum up. I wasn’t distraught as much as feeling uncertainty weigh on my shoulders a little too heavily. There’s been a lot of change in my life; it makes uncertainty thicken, and perception of the future seem less exciting and more daunting. I was traveling quietly, but mentally chattering. I hopped noiselessly back into the car after this post-dinner encounter with the Lord, and we hit the road again, with another hour ’til we met our destination for a week of house-hunting.

I watched the sky get darker and darker.

I listened to “Red Sea Road” by Ellie Holcomb, mulling over the Israelites’ journey, letting the story play over in my head.

Rain drops began harshly skittering over the windshield and skimmed across my window. They raced each other across the glass, twinkled against the headlights of cars passing on the opposite lane, and grew more and more abundant in number. As I listened to music on my phone, God decided to talk to me.

“This is going to be like My provision for you.”

“I know,” I said (or rather thought). “I’m kind of used to the reminder these days.”

The rain became increasingly aggressive and profuse. “No,” He said. “You don’t fully believe it. THIS is how much you’ll be lavished in what you most need.”

I almost smiled at the not-so-pretty, flash thunder storm. Lightning crackled over the clouds. “Doesn’t look exactly graceful. Kind of like life right now, I suppose?”

“Yes. It won’t be pretty all the way through. But this is provision just as much.”

I didn’t expect the rain to pelt any harsher, but it did. Difficulty seeing the road grew for my dad, who was driving. Lightning soon seemed to be following and flashing everywhere around us and the sky was slowly changing again, this time from a beautiful blue to a hazy, muddy yellow. It looked like old mustard. As far as I could remember, I’d never seen the sky look like this before in my life. Much like stepping into unfamiliar territory before, I took in my surroundings and my family all marveled at the color.

The farther we drove, the more my somewhat heavy uncertainty lightened its weight; my interest was engaged in the sky and how would God paint it next—after all, the sun had yet to set before thunder had rolled in. He then dressed the sky in a brighter shade of yellow, rain still pouring, and then…we saw the sun, right there, through a haze of clouds. Rather than shine, it glowed, setting and brightening the sky from almost night-like darkness to a more lemony shade. I couldn’t believe what I was watching. The asphalt was wet enough that every bit of the sky’s color soaked into the road, just like the ocean does in order to be blue. 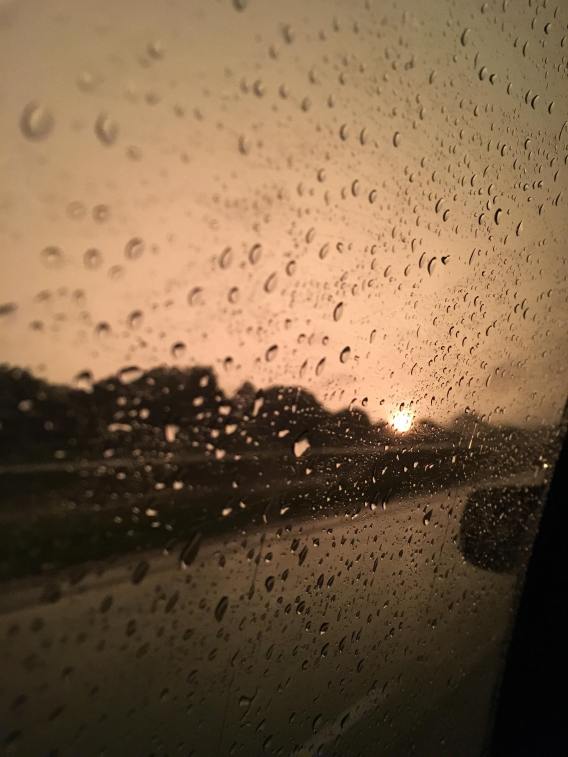 Lightning continued flashing in the pale sky outside, as God spoke to me again:

The rain slowly dwindled, the music in my earbuds changed to a slower song, and my whole family oohed and ahhed at the world around us. The horizon was wide enough to watch the Lord’s lightshow at every angle: we left behind the massive storm clouds, drove towards ethereal sunset-light, and lightning continued to streak the sky like veins and dart between a double rainbow behind us. All of this happened at once.

The clouds coated in yellow sunlight canopied little us in our Jeep. God told me, “This is what it looks like to ‘take refuge under My wing‘. I am with you.”

Growing up a traveler, and recently, being in a state of transition for two and a half years, has made me live in an in-between place a lot of my life. It’s not just limited to physical places, but in friendships, people, houses, and cultures. I’m often exploring their depths and echoing these things back in how I express myself with art and mannerisms because I’m “nesting” as I like to call it. When on vacation, I don’t just refer to it as “our hotel” but I habitually call it “home.” I’ve even called other people’s homes “home,” because wherever I sleeping I usually call “home.”

I’m no traveling hobo, but in a sense, I feel like a nomad. I feel like I’m on the road relationally too, making people my “homes;” making them family (and even diving in too deep too fast sometimes). Then the Lord pulls up the roots and tells me to go somewhere else again. On the actual road, to hunt for houses, I wondered where the next physical and relational “home” would be, and how temporarily I’d reside.

Though we don’t always get a big sign in the sky, God decided at this point to show me a peek at promises that’d always been.

The worship song I was listening to at that very moment, being canopied under a yellow sky, then happened to sing the words:

“You’re not just in the glory,

You meet us on the ground;

You’re not just in the sky, no,

You meet us on the ground…”

That’s when I began to cry and thank God like crazy.

We saw another storm cloud ahead. We actually thought it was a mountain at first, but…nope. Just a giant cloud.

And then, we drove in. Just like when we first left Culver’s, the sky darkened again, only now, the sun had fully set, and the sky held a warm teal tone with a fast-fleeting yellow horizon. The edge of the mountainous cloud lingered, to canopy us and what I think were two planets (one was most likely Venus) or stars in the distance. They were so close they could’ve been mistaken for one object, but I’m almost positive it was two twinkling pinpricks in the sky.

God reminded me that He names the stars and that such a fact isn’t lackluster or cliché.

“In every small way, I am present. In every large way I am present. What on earth could man do?” He said. “You don’t often believe I’m good or working out your good because you want your idea of it. Stop looking at the earth and instead meet Me in the heavenly amid everything earthy about you and your life. Seek My hands painting the sky. Seek My care in every small way. Your nomadic walk will end one day. You saw something so tiny compared to what will happen to earth one day.”

I got a glimpse of Home on another nomadic journey.

[Update since first draft:
God answered prayers in many ways.

My Father is dearly close amid this.

And re-editing this post (it got deleted the first time I edited it), helped to refresh myself to the promises.

I’m keeping my eyes peeled. There’s much to come, I know.] 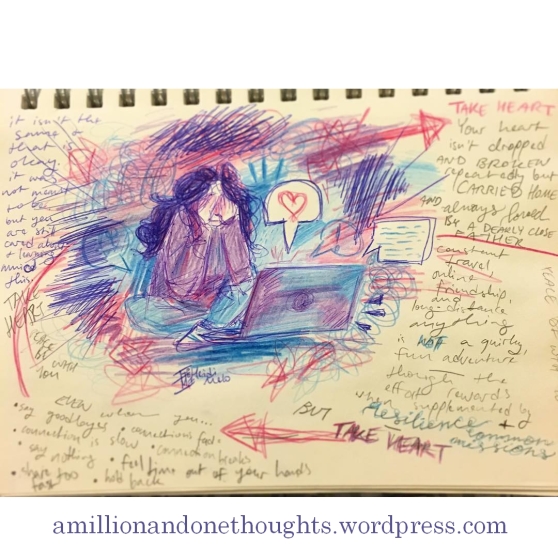 “Constant travel, online friendship, and long-distance anything is NOT a quirky, fun adventure–though the effort rewards when supplemented by resilience + common missions [and there are many joys within it].
BUT TAKE HEART.
Even when you…
•say goodbyes
•say nothing

•connections fade
•connection is slow
•connection breaks
[you…]
•share too fast
•hold back
•feel time out of your hands
TAKE HEART. PEACE BE WITH YOU.
It isn’t the same; that is okay.
It was not meant to be [this way].
But you are still cared about + learning amid this.
TAKE HEART.
Your heart is not dropped and broken repeatedly but carried home and always loved by a dearly close Father.”
Far-away relations of any kind have their small joys, but are nonetheless hard. If you have any, this is something I made for you.
Peace be with you.

Perhaps you don’t live a nomadic life physically, per se. Maybe you’ve never moved or traveled. But I do know we’ve all felt like we didn’t quite fit in one place or another. Or maybe you’ve felt in-between two seasons of life (sadness and joy, life and death, waiting and desires fulfilled…). Even if you’ve never been a physical nomad, I know we’re all nomads in the heart. Let’s shoulder our crosses together, grab some food for the trip, and begin the trek, with vision set on a Healer.

Eyes on the skies, frens,